Public library and the return of the repressed. November 2016, Skopje.

Under the coercion of the market, with its inability to harmonize democratic equality with global free commerce, freedom of journalism transmogrifies into corrupt media acting as cronies of corporate and political interests; freedom of expression into officially condoned hate speech; while freedom of research and education into sky-rocketing student-fees, precarious academic labour and intellectual self-censoring.

When the idea of freedom as regulated by the markets meets the idea of political freedom as self-assertion of ethnic domination, as is the case in the countries of former Yugoslavia, then the corrupt media, the normalized discrimination and the self-censorship look the other way when books are thrown out of the libraries, documents are disappeared from the archives and monuments are blasted into the air in an effort to wipe out the collective memory of emancipatory past and to re-write the history anew.

Otpisane (Written-off) is a collection of books that were digitized based on the write-off lists and testemonies documenting the massive removal and destruction of books from public libraries in the early 1990s in Croatia. Under the guise of legitimate librarian procedure of writing off worn-out or unused copies of books, in a matter of couple of years almost three million books by Serbian authors and publishers, printed in Cyrillic, books dealing with socialism, WWII resistance movement or history of labor movement were removed from the shelves of Croatian libraries. This massive removal and destruction of books testifies of the ideological and censoring function that libraries and cultural institutions play in the processes of state and national identity building.

In 2015, on the 20th anniversary of Operation Storm, which saw some 100.000 Serbs leave Croatia, What, how and for whom/WHW and Memory of the World organized an action1 calling on people to bring copies of the removed and destroyed books to Galerija Nova in Zagreb for digitization. Through the act of digitization that which was repressed from collective memory was brought back into the public. The collection and the action are based on the data collected in the extensive research on "library cleansing", conducted and documented in the book Libricide - The Destruction of Books in Croatia in the 1990s by Ante Lešaja. What Lešaja's book clearly shows is that the destruction of books -- as well as the destruction of monuments of People's Liberation War -- was not a result of individual actions, as official accounts are trying to argue, but a deliberate and systemic activity which symbolically summarizes the dominant politics of the 1990s.

And yet, if public libraries can serve in the repression and regulation, in the sanctioning of political domination, they can also be acts of emancipation. 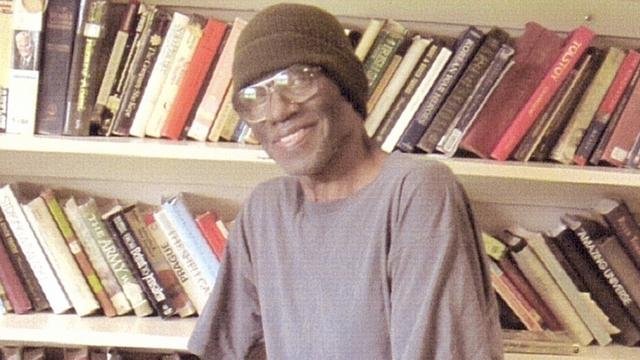 For over 41 years Herman Wallace, a Black Panther activist, lived in Solitary Confinement in Louisiana's State Prison System. Herman Wallace, born New Orleans in 1941, was convicted of armed robbery and sent to Angola prison in 1971. In 1971 he established the Angola Chapter of the Black Panther Party with Ronald Ailsworth, Albert Woodfox, and Gerald Bryant after receiving permission from the Panther central office in Oakland. After the murder of a prison guard, with no physical evidence linking them to the scene of the crime, the Angola's most visible organizers of justice, Herman Wallace, Albert Woodfox and Robert King --- were convicted for the murder and put in solitary. In July 2013 Amnesty International called for the release of 71-year-old Herman Wallace, who had advanced liver cancer. He was released October 1, and died three days later, on October 4, 2013.

In 2003, artist Jackie Sumell asked Herman a question: "What kind of house does a man who has lived in a 6' X 9' box for over 30 years dream of?" The answer to this question was made manifest in a remarkable project called The House that Herman Built. Although Herman passed away in 2013, the project has transitioned from building a virtual home to building Herman's actual dream home in his birth city of New Orleans. While he was still alive, Jackie also asked Herman what books would his dream library in his dream house contain -- to which he sent a list of some hundred books that were the basis of political emancipation. Until that home is built, Herman's dream library remains housed at an art residency in Stuttgart, while its digital replica awaits for you on a server.

Public library holds an ambivalent position amidst that domination of the market and the nation. Emerging from the bourgeois and proletarian revolutions of the 18th and 19th century, the institution of public library gradually formed in the liminal zone of the process of capitalist development. By providing de-commodified access to culture and knowledge, it limited the market\'s ability to decide who will be denied edification and education -- and will this knowledge be at the service of continued domination or transformation of the world. From its early days public library held a utopian promise of all memory of the world becoming available to all members of the society, a promise that with the emergence of the internet seemed to have become reachable within a next step. And yet, the parallel rise of the digital capitalism and the reassertion of nationalism has severely limited the public library in the pursuit of its emancipatory mission and sometimes has driven overzealous librarians to commit systematic acts of ideological purge. This has led to a number of digital shadow archives and libraries being created by internet communities -- often in the open disregard of the copyright law and the dominant ideology of nationalism -- providing access to knowledge for all and preservation of collective memory where public institutions were denied or have failed to do so.

Public libraries are an endangered institution, doomed to extinction.

Petit bourgeois denial prevents society from confronting this disturbing insight. As in many other fields, the only way out offered is innovative market-based entrepreneurship. Some have even suggested that the public library should become an open software platform on top of which creative developers can build app stores2 or Internet cafés for the poorest, ensuring that they are only a click away from the Amazon.com catalog or the Google search bar. But these proposals overlook, perhaps deliberately, the fundamental principles of access upon which the idea of the public library was built.

The public library does not need the sort of creative crisis management that wants to propose what the library should be transformed into once our society, obsessed with market logic, has made it impossible for the library to perform its main mission. Such proposals, if they do not insist on universal access to knowledge for all members, are Trojan horses for the silent but galloping disappearance of the public library from the historical stage. Sociability - produced by public libraries, with all the richness of its various appearances - will be best preserved if we manage to fight for the values upon which we have built the public library: universal access to knowledge for each member of our society.

Library Genesis, Aaaaarg.org, Monoskop, UbuWeb are all examples of fragile knowledge infrastructures built and maintained by brave librarians practicing civil disobedience which the world of researchers in the humanities rely on. These projects are re-inventing the public library in the gap left by today's institutions in crisis.

Library Genesis is an online repository with over a million books and is the first project in history to offer everyone on the Internet free download of its entire book collection (as of this writing, about fifteen terabytes of data), together with the all metadata (MySQL dump) and PHP/HTML/Java Script code for webpages. The most popular earlier repositories, such as Gigapedia (later Library.nu), handled their upload and maintenance costs by selling advertising space to the pornographic and gambling industries. Legal action was initiated against them, and they were closed4. News of the termination of Gigapedia/Library.nu strongly resonated among academics and book enthusiasts circles and was even noted in the mainstream Internet media, just like other major world events. The decision by Library Genesis to share its resources has resulted in a network of identical sites (so-called mirrors) through the development of an entire range of Net services of metadata exchange and catalog maintenance, thus ensuring an exceptionally resistant survival architecture.

Aaaaarg.org, started by the artist Sean Dockray, is an online repository with over 50,000 books and texts. A community of enthusiastic researchers from critical theory, contemporary art, philosophy, architecture, and other fields in the humanities maintains, catalogs, annotates, and initiates discussions around it. It also as a courseware extension to the self-organized education platform The Public School.

UbuWeb is the most significant and largest online archive of avant-garde art; it was initiated and is lead by conceptual artist Kenneth Goldsmith. UbuWeb, although still informal, has grown into a relevant and recognized critical institution of contemporary art. Artists want to see their work in its catalog and thus agree to a relationship with UbuWeb that has no formal contractual obligations.

Monoskop is a wiki for the arts, culture, and media technology, with a special focus on the avant-garde, conceptual, and media arts of Eastern and Central Europe; it was launched by Dušan Barok and others. In the form of a blog Dušan uploads to Monoskop.org/log an online catalog of curated titles (at the moment numbering around 3,000), and, as with UbuWeb, it is becoming more and more relevant as an online resource.

Library Genesis, Aaaaarg.org, Kenneth Goldsmith, and Dušan Barok show us that the future of the public library does not need crisis management, venture capital, start-up incubators, or outsourcing but simply the freedom to continue extending the dreams of Melvil Dewey, Paul Otlet and other visionary librarians, just as it did before the emergence of the Internet. With the emergence of the Internet and software tools such as Calibre and [let's share books], librarianship has been given an opportunity, similar to astronomy and the project SETI@home, to include thousands of amateur librarians who will, together with the experts, build a distributed peer-to-peer network to care for the catalog of available knowledge, because

a public library is:

With books ready to be shared, meticulously cataloged, everyone is a librarian. When everyone is librarian, library is everywhere.5