In [lets's share books] Calibre plugin a librarian gets her name shuffled from the list of great librarians of today and the past. Given name can be saved (by clicking [SAVE]) or let the new name appear every time one restarts Calibre. During the session librarian's name can be changed by clicking [NEW] (see screenshot below). That said, the better future will appreciate if you use [EDIT] button, recognize the importance of a civil disobedience today and become a brave librarian who share her book catalog under her own name. 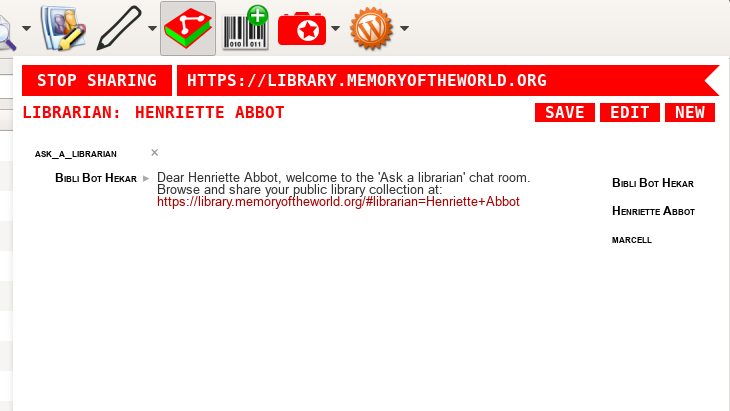 Here is the list compiled together with Femke Snelting:

Ezra Abbot Bible scholar and library assistant at Harvard. Orders the internal card catalog to be opened to an interested outside readership.

Dušan Barok Initiator and principle librarian of Monoskop, a wiki-based portal for collaborative research in media art and culture.

Adam Bartsch Developing a set of detailed and anticipatory behavioral guidelines for librarians. The commands are enriched by a flowchart, guiding order and approach to coordinated practice.

Pura Belpré First Puerto Rican librarian in New York City, advocate for the Spanish-speaking community. Also a writer, collector of folktales, and puppeteer. Walter Benjamin "I am unpacking my library. Yes, I am. The books are not yet on the shelves, not yet touched by the mild boredom of order."

Hugo Blotius First librarian of the Royal Court library at Vienna. His project of cataloguing it's collection was an example to demonstrate how future catalogs could be handled.

Howard Brown Campaigned to have books about the gay liberation movement at the Library of Congress reclassified from "Abnormal Sexual Relations, Including Sexual Crimes" to "Homosexuality, Lesbianism---Gay Liberation Movement, Homophile Movement"

Jacques Charles Brunet Published in 1810 the catalogue Manuel du libraire et de l'amateur des livres, the first European book of its kind where works are arranged in classes according to their subjects.

Bookwarrior He is an admin of Library Genesis.

William Croswell Lazy librarian who invented a cut-up catalogue of the Harvard College Library, a system that affords mobility, flexibility, and reordering of the respective units.

Robert Darnton Director of the Harvard University library, pioneer in the field of the history of the book. Founder of the Gutenberg-e program.

Melvil Dewey Inventor of the Dewey Decimal system of library classification. Introduced the concepts of relative location and relative index which allows new books to be added to a library in an unambiguous location based on subject. The notation makes use of three-digit Arabic numerals for main classes, with fractional decimals for details.

Sean Dockray Initiator of The Public School and AAAAARG.ORG, a crucial site for the sharing and discussion of texts drawn from cultural theory, politics, philosophy, art and related areas.

Alexandra Elbakyan She is a neurotechnology researcher, a free software advocate, and a developer. She is a founder of Sci-Hub one of the main sites that circumvents the scientific publisher's paywalls. She uploaded at least half of more than 41 million paywalled scientific papers to the Library Genesis database and worked actively to create mirrors of it.

Charles Folsom Librarian at Harvard. Mistrusts the unconventional card-indexing procedures and meticulously transfers the "sheet catalogue" back into a bound catalog.

Henri La Fontaine International lawyer and winner of the Nobel Prize for Peace in 1913. Early advocate for women's rights and suffrage, and cofounder of the Institut International de Bibliographie along with Paul Otlet.

Conrad Gessner Naturalist and bibliographer. His five-volume Historiae animalium is considered the beginning of modern zoology.

Kenneth Goldsmith Poet and habitual editor of the prolific archives at UbuWeb, a resource for avant-garde material available on the internet.

Georg Philipp Harsdorffer Completes the idea of an excerpt collection as an ordering of paper slips in a box with twenty-four drawers in alphabetical order.

Aaron Swartz The Internet's Own Boy.

Joachim Jungius First practitioner of nonhierarchical indexing, compiled approximately 150,000 slips of papers with accumulated knowledge, but without registers or indexes or reference systems.

Kovid Goyal Creator and principal developer of calibre, a comprehensive suite of utilities for managing, converting and viewing e-books in digital formats.

Markus Krajewski Developer of the bibliographic software Synapsen: A Hypertextual Card Index and author of "Paper Machines: About Cards & Catalogs"

Gottfried Wilhelm Leibniz Mathematician and philosopher in the habit of sticking small labels to repositories indicating what was contained on every shelf of his library. In this way he maintained a topical order, ignoring different formats.

Gotthold Ephraim Lessing Energetic librarian/dramaturg tenured at the ducal library in Wolfenbüttel. On random walks through the library, he discovered forgotten and unexpected books, bypassing any index or catalog.

Sebastian Luetgert Writer, programmer, media artist and activist. Started textz.com, a database containing all kinds of texts by institutions and individuals under the motto «the & in copy & paste»

Johann Jakob Moser Prolific lawyer, promoted the use of excerpts as a method for collecting material for future writing.

*Brewster Kahle** He is an American computer engineer, Internet entrepreneur, internet activist, advocate of universal access to all knowledge, and digital librarian.He is the founder of the Internet Archive, the Internet Credit Union, Alexa and Thinking Machines and a member of the Internet Hall of Fame.

Gabriel Naudé 17th century scholar who wrote an influential manual on how and why to establish a library.

Vincentius Placcius Wrote "The Art of Excerpting" in which he recommends grouping annotations in excerpt books or bound library catalogs.

Franz Stephan Rautenstrauch Devoted himself to the production of a "Catalogo Topographico," following the principle of using it as a basis for all other catalogs.

Johann Wilhelm Ridler Led the Vienna University Library from 1813. Declared the card index to be the indispensable basis for cataloging and a guarantee for long-term access.

Angela Ruiz Robles Teacher, writer, inventor and pioneer of the electronic book. She invented the first mechanical encyclopedia in 1949.

Abbe Rozier Contributes to the development of a card-catalog system by copying data onto uniformally cut sheets so they could be shuffled, ordered, and exchanged.

Rick Prelinger He is an archivist, associate professor at the University of California, writer and filmmaker, and founder of the Prelinger Archives, a collection of 60,000 advertising, educational, industrial, and amateur films acquired by the Library of Congress in 2002 after 20 years' operation.

Aristophanes of Byzantium He succeeded Eratosthenes as head librarian of the Library of Alexandria at the age of sixty.

Nadežda Krupskaja She was a Russian revolutionary and politician. From 1929 until her death in 1939 she was Soviet Union's Deputy Minister of Education. She immensely improved education and library system as well as the librarian profession in Soviet Union.

Georges Bataille He was a French intellectual and literary figure working in literature, anthropology, philosophy, economy, sociology and history of art. He was an archivist and a librarian at the Bibliothèque Nationale.